Andy gets call up for England Box Lacrosse team

Sport Development Officer Andy Ellison has been selected to play for the England Men’s Box Lacrosse team at the 2015 Indoor World Games. 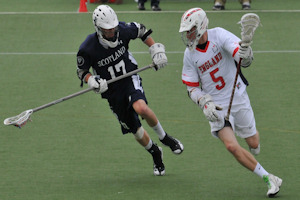 Box Lacrosse is an indoor version of lacrosse and is played between two teams of six players each, traditionally on an ice hockey rink once the ice has been removed or covered.

England's first match is on 18 September against the Czech Republic, and other matches in their group include America, Canada and the Iroquois Nationals - a team of native Indian Americans who created the game of lacrosse thousands of years ago.

The tournament, taking place in Syracuse, New York, will be televised on ESPN around the world and is set to attract thousands of fans.

Andy, who is also a qualified personal trainer, has been putting in a lot of preparation at the Sugden Sports Centre and also training at a gym in Sale to enable him to compete in one of the fastest and most physical sports in the world.

Andy says:  "Unfortunately the tournament falls over Welcome Week, a crucial time to get teams signed up to the campus leagues, which isn't ideal.  However, for this once in a lifetime experience my department has very kindly made an exception!"

"It is a great opportunity and an honour to represent my country and I hope I'm setting a good example to students looking to get involved in sport during their time at university.  During the tournament I will not only be an ambassador for a sport I love but Manchester as well."

Andy is keen to promote the positive messages of leading an active and healthy lifestyle and he manages and takes part in many of the Active Manchester programmes on offer.