Tipping our hat(s) to Manchester

‘The Great Hatmandu’ to raise money for victims of Nepalese earthquake 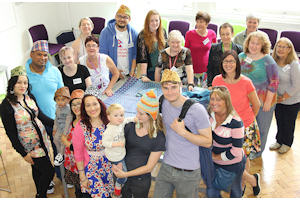 University staff and a popular Nepalese family have come up with a unique idea to raise money for survivors and the families of those who lost their lives in the earthquake which devastated their home country earlier this year.

Alison Hamilton, from the Faculty of Engineering and Physical Sciences, and Fiona Colton, from the School of Materials, teamed up with restaurateur Buda Dangol, whose family run The Great Kathmandu Restaurant, to make and sell Nepalese-style hats. Colleagues and students from across the University joined in, generously contributing their time and skills to the project.

The fundraisers are calling their efforts ‘The Great Hatmandu’ and are hoping foodies and locals will buy their finely crafted handmade pieces when they are sold on a stall outside the restaurant on Saturday and Sunday, 5 and 6 September.

Buda, whose father founded the popular West Didsbury eaterie, said: “The response to The Great Hatmandu initiative has been overwhelming and heart-warming.

“We’re proud to be working closely with staff and students from the University, especially Alison Hamilton and Fiona Colton who organised the sewing-bee. Their friends and families have been crocheting and knitting too, it’s been amazing.

“Nepal is really trying to get back on its feet. They are erecting temporary shelters and rebuilding transport routes. However we need to move quickly to raise money to help them now that seasonal monsoon has arrived. It’s about keeping the people of Nepal in our minds and raising awareness of their desperate struggle.

“There are hundreds of Nepali families like ours in Manchester, and along with local businesses we have been working tirelessly to raise money.

“We have already distributed several community water filters and tents in Nepal through small, local organisations like the Rotary Club of Yala, who have been able to move quicker than large groups like the DEC.

“We hope the wider community of Manchester will keep thinking about Nepal, so we came up with this idea for something that’s fun to make and fun to wear.”

For more information and to keep in touch with the initiative go to: