From 27 July to 31 August, Jodrell Bank will be hosting the SKA Shared Sky Exhibition featuring celestial artwork by indigenous artists from South Africa and Australia, where the Square Kilometre Array will be located 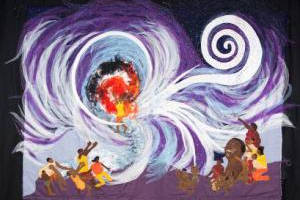 Alongside the exhibition you can make your own artwork, explore the stories of the remote regions that will host the Square Kilometre Array telescope and get the chance to meet some of the scientists and engineers who work on the project:

Yamaji and Aboriginal artists from the mid-west region of Western Australia and African artists of Xam descent from the central Karoo region of South Africa’s Northern and Eastern Cape have created artworks in response to ancestral stories about the night sky – a sky they both share as it appears above their own traditional homelands. On both continents this ancestral country has nurtured ancient traditions that live on in the spirit of Indigenous artists working in community based art centres today.

These sparsely populated, remote areas, were specifically chosen for their radioquietness and relative emptiness, making them the perfect sites to co-develop the Square Kilometre Array – the world’s largest radio telescope – itself a collaboration between governments, scientists and engineers from around the world.

Shared Sky is presented by the international SKA Project and Jodrell Bank Discovery Centre and sponsored by the SKA Organisation, SKA South Africa and SKA Australia, in collaboration with Curtin University’s Institute for Radio Astronomy and the John Curtin Gallery.

Shared Sky was developed in collaboration with Yamaji Art Centre, Geraldton, Australia and the First People Centre at the Bethesda Arts Centre, Nieu Bethesda, South Africa. International curation was done by Chris Malcolm, Director of the John Curtin Gallery and the selection of the South African representative artwork was done by John Parkington of the University of Cape Town.