On 6 June, Manchester Museum handed over the skull of a Japanese WWII soldier to Japanese authorities 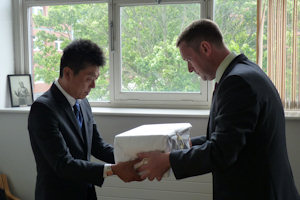 The skull had been removed from a grave on a battlefield in Myanmar, also known as Burma, and brought back to Britain in 1945. It was given to the Anatomy Department of the University shortly afterwards and transferred to the Museum in the early 1970s.

Below is the text of a letter which was with the skull when it arrived in the collection:

"This skull was found at Shwegyin on the bank of the Chindwin River in March 1945. The area had been a battlefield and many bodies had been buried in shallow graves and several were uncovered. This skull was removed from one such body having been picked clean presumably by insects etc and the remainder of the body was dressed in Japanese army clothing – blouse, trousers, puttees etc."

The handover was the culmination of nearly 10 years of negotiations; Japanese authorities had made renewed efforts for the return of these and similar remains in other museums, to coincide with the 70th anniversary of the end of WWII. The skull will be buried at the national cemetery at Chidorigafuchi.

Katsumi Chiba of the Japanese Social Welfare and War Victims’ Relief Bureau said: “On the 70th anniversary of the end of the Second World War I am happy to receive these remains and delighted to be able to return them to an appropriate resting place.”