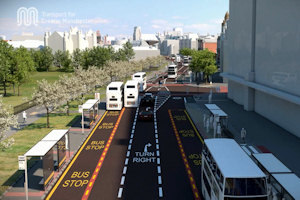 The Oxford Road bus priority works will begin on 31 July for eight weeks and have been timed to coincide with the closure of Oxford Road for the demolition of the Precinct bridge (10 August - 6 September) in order to reduce traffic flow through this area.

The first step will be to build a trial bus stop on Oxford Road, below the Hathersage Road junction, opposite Whitworth Park. The stop, featuring Manchester's first physically segregated ‘Dutch-style’ cycle bypass, has been carefully developed following public consultation in 2013.

The image above shows an example of a ‘Dutch-style’ cycle lane, which safely segregates cyclists from other road traffic, with the cycle lane passing directly behind the bus stop platform.

During construction of the trial stop there will be some localised lane narrowing and temporary closures between Moss Lane East and Hathersage Road, but most of the work will be timed to minimise impact. Temporary diversions will be clearly signposted to make users aware of the alternate routes.

To help minimise disruption during the work, Transport for Greater Manchester (TfGM) will monitor the road network in real-time and adjust traffic signals to reduce any congestion. However, if you use this route regularly, you should allow more time for your journeys.

When the trial stop has been built, TfGM will ask users for feedback so that they can monitor and evaluate how cyclists, bus users and pedestrians interact at the stop - including the effectiveness of the proposed central zebra crossing. The design will then be fine-tuned to ensure that it works for everyone.

The main work to transform Oxford Road is scheduled to begin later this summer. Further updates will be published as they are issued by TfGM.

From 10 August to 6 September, Oxford Road will be closed between the junctions with Hathersage Road and Booth Street West/East to allow the demolition and removal of the Precinct bridge. Access will be maintained for vehicles on University business or with other local businesses.

Vehicular traffic and bus route diversions will be in place, and will be the same as during the first road closure in June. The main diversionary route follows Hathersage Road, Upper Brook Street and Booth Street East, and will be used by the following bus services:

A map of the road closure and diversion routes can be downloaded from:

This differs slightly from the other bus route diversions and will be as follows:

The latest updates for the 147 service are online at:

SPAR store closed their premises on 28 July as their lease had expired and will not be reopening.

Blackwells/Starbucks will be closed for three days from Saturday, 15 to Monday, 17 August whilst the heaviest and noisiest of the bridge demolition activities take place.

Further updates will be provided as preparations and work progresses.