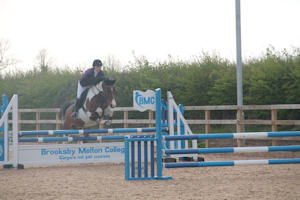 Lacey Munroe, 23, from Massachusetts, earned her BSc in zoology while fighting Hodgkin's Lymphoma.  After having eight months off and enduring six rounds of chemotherapy, she came back to finish her degree only a month after being given a clean bill of health.

Since that time Lacey has represented the Equestrian Club at the British Universities and Colleges Sport’s regional competition, competed in the Great Manchester Run and in the Lancaster Half Marathon to mark a full year since she completed her chemotherapy treatment.

Earlier this year the budding sportswoman won a Purple Pride award from the Athletic Union for showing remarkable courage and bravery and reflected the spirit of the award, which represents great triumphs and willingness to do whatever it takes for the purple shirt.

In September Lacey will be starting her Masters in Science Communication where she plans to develop her expertise in science policy and science journalism. She has ambitions to become a journalist, and eventually play a role in influencing public science policy.

Lacey said: “It’s so surreal to finally be graduating. I feel like my life is moving forward again after being put on hold for treatment. It helps that my hair has grown back too, so I am starting to feel normal again!

“With regards to riding, I’ve without a doubt had my most successful year yet. Riding is what got me through my treatment, even when I barely had the energy to get on. I couldn’t have done it without the amazing support of the University’s Equestrian Club girls – they were incredibly supportive throughout my entire treatment and when I returned. I’m planning on riding for the team again next year if they’ll have me! It will be my sixth year competing.”