The University of Manchester recently hosted the Tiles of Knowledge, an event organised to celebrate the Mexico-UK Bilateral Year 2015. 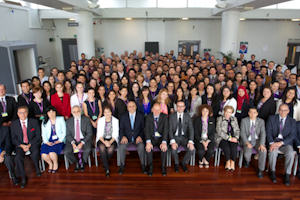 The event brought together leading academics, scientists, researchers, industrialists, research centre directors and research and education funders from a variety of areas from all around Mexico and the University of Manchester in order to foster knowledge and idea exchange, strengthen existing partnerships and explore future potential collaboration of mutual benefit to the two countries.

Subjects of strategic importance were included in the event including: Health: Cancer, Immunology, Orthopaedics, Tissue Repair and Inflammation, Graphene, Energy, Women in Science, Collaboration in Higher Education and Innovation: Entrepreneurship and Science Communications.

Professor Colin Bailey, Deputy President and Deputy Vice-Chancellor of The University of Manchester, Enrique Cabrero-Mendoza, General Director of the National Council of Science and Technology (CONACYT) and Diego Gómez-Pickering, Mexican Ambassador to the United Kingdom welcomed the attendees and opened the Tiles of Knowledge event.

The organising committee in Manchester was led by Professor Colin Bailey and Professor Teresa Alonso-Rasgado and her team and in Mexico by Julia Taguena & Dolores Sanchez and their respective teams in CONACyT.

Professor Bailey said “I would like to thank everyone who has in one way or another contributed to the great success of this event. The Tiles of Knowledge is the culmination of what a long term partnership can achieve and I am sure that it will go on to strengthen the University’s existing relationship with Mexico even further.”