From 16 July to 20 December at The John Rylands Library 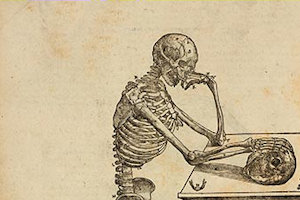 Housed in the neo-Gothic grandeur of The John Rylands Library, Darkness and Light reveals how Gothic architecture and anatomy inspired and influenced a literary genre, and how the lasting legacy of Gothic can be found in art, films and subculture today.

From the fantastical to the macabre, this intriguing exhibition unearths Gothic treasures from the Library’s Special Collections to investigate subjects as varied as the role of women in the Gothic movement, advances in medical science and classic literature.

Amongst the fascinating items on display is Horace Walpole’s The Castle of Otranto (1764), the first Gothic novel. With a Gothic medieval castle, doomed love and restless spectres of the past, it sets the scene for the genre and sits alongside a whole host of Gothic bestsellers including The Monk, Udolpho and Jekyll and Hyde.

The exhibition also showcases artwork by students from the University of Salford and a gallery of photographic portraits of ‘Goths’, celebrating diversity and inviting visitors to explore what Gothic means to them.

Alongside the exhibition, experience a ghostly Gothic tour of the Library or come along to screenings of classic Gothic films, including FW Murnau’s Nosferatu, in the striking Historic Reading Room.

To see this and other exhibitions, visit: