On Devo launched in momentous week for Manchester

An eye-catching, limited edition, printed collection of analysis and ideas on devolution has been unveiled - leading to thousands of people clamouring to download a copy 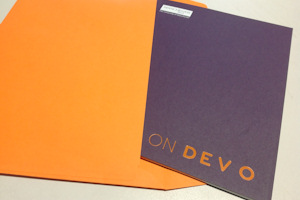 On Devo brings together nine of the most essential blogs on devolution so far that have appeared on Manchester Policy Blogs – explaining and questioning its impact on the region’s politics, the economy, health and social care and immigration, as well as examining the role the new mayor will play.

The limited edition publication is the brainchild of policy@manchester, in conjunction with cities@manchester.

It has been sent to the desks of 101 of the city-region’s most influential leaders, influencers and power-brokers during a significant week for ‘DevoManc’. An electronic version has already been downloaded nearly 2,000 times and has been widely talked about on Twitter using the hashtag #OnDevo.

On Devo showcases the important contribution that our academics are making to the devolution debate, regionally and nationally.

On Devo was published on the day Honorary Professor and Commercial Secretary to the Treasury, Lord Jim O’Neill of Gatley delivered his first Northern Powerhouse speech to the region’s business community at the Greater Manchester Chamber of Commerce Annual Dinner.

It also coincided with the 11th Annual Meeting of the OECD LEED Forum on Partnerships and Local Development in Manchester, and Tony Lloyd taking office as the interim mayor.