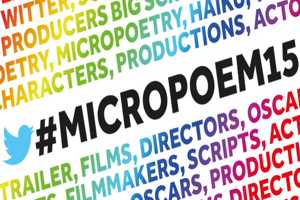 Poetry in 140 characters? Try your hand in the Centre for New Writing's #micropoem15 competition.

For the third year run, the Centre for New Writing and the School of Arts, Languages and Cultures are pleased to announce the launch of #micropoem15.

Tweet your shortest poems on the longest day of the year. While 'poet of the screen' usually means you are reading about Tarkovsky or Terence Malick, or WH Auden's script for Night Mail, we thought we’d ask you to write poems about the screen this year: with the opening of Home and the advent of our new screenwriting MA at the Centre for New Writing, we'd like you to tweet a micropoem on the theme of 'film'. Maybe you can address (or describe – very briefly!) a film you love (or hate), a film you'd like to see (made or unmade), or a memorable place or occasion which involved a film…

All you need to do to enter is tweet your micropoem with the hashtag #micropoem15.

Your micropoem must be themed around 'Film'

Your micropoem must be in the English language

One micropoem per person

Prizes for the best 3 poems include tickets to a Literature Live event in autumn 2015, book vouchers and a mini iPad.

The competition will be judged by colleagues from the Centre for New Writing:

School of Arts, Languages and Cultures