New charity aims to inspire the next Alan Turing

A new £1.75m fund to support visionary and pioneering pure mathematics at the University of Manchester was announced today, funded from the Estate of Dame Kathleen Ollerenshaw. 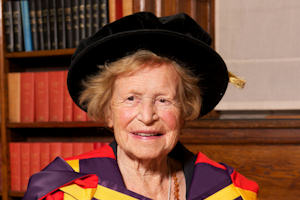 The Dame Kathleen Ollerenshaw Charity is being set up with an endowment anticipated to be in excess of £1.75M, and will fund, in perpetuity, Visiting Professors and associated costs at the University of Manchester, in order to break new ground in a discipline that was close to Dame Kathleen’s heart and inspire the Alan Turings of the future.

The Professors will deliver the annual Dame Kathleen Ollerenshaw Lecture, which is already well established at the University, and engage with the University’s staff, students and schoolchildren across the Greater Manchester region to share findings and spread excitement about a discipline that has been fundamental to scientific and economic breakthroughs in the UK and at Manchester. The Trustees of the Fund also have the flexibility to support work at the interface between mathematics and astronomy, recognising Dame Kathleen’s passion for Jodrell Bank and other observatories.

John Timpson, CBE, close relative of Dame Kathleen and Trustee of the new Charity, said: “The Trustees are honoured to have the opportunity to take forward such important work in Dame Kathleen’s name. Kathleen selected the University as the focus for this initiative to mark the long-standing connections she enjoyed with successive University Vice-Chancellors, and with the School of Mathematics. Her driving force was the possibility of connecting the deep history in pure mathematics at Manchester (including Alan Turing’s work) to the present and future.  The idea of attracting the world’s best mathematicians to the Manchester campus as a hub for engaging students, researchers and the wider public in new ideas, discussion and debate motivated her very deeply.”

Dame Kathleen, who lectured in mathematics part-time at the University in the years following the second world war, published over 25 mathematical papers and was a former President of the Institute of Mathematics and its Applications. She was a former member of Court at the Victoria University of Manchester, and was Deputy President of UMIST for 10 years. She received an honorary degree from the combined University of Manchester at the age of 100.

Professor Dame Nancy Rothwell, President and Vice-Chancellor of the University, said: “Everyone who met Dame Kathleen knew quite what an inspirational and special leader she was in so many different aspects of life, from educational reform, civic and political leadership, through to her passion for mathematical ‘magic squares’ for which she was held in the highest esteem by mathematicians of international repute. We are honoured and delighted to be the focus for support from this important new charity.”

Professor Peter Duck, Head of the School of Mathematics at the University, said: “We are planning a range of innovative and inspiring activities around the appointment of future Visiting Professors from the world’s other leading centres in pure mathematics. Dame Kathleen well understood the vital role of mathematics as the critical foundation for scientific and economic development. This charity will create a wonderful programme of mathematical discovery and excitement in Dame Kathleen’s honour, which is most appropriate as she was a great friend of the mathematics community in Manchester, over many years.”