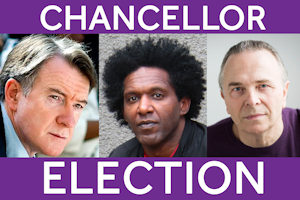 The election to choose the new Chancellor will close on 18 June at  noon and the results will be announced on 22 June, with the successful candidate taking office on 1 August for a period of seven years.

An email reminder was issued to those on the electoral roll who haven’t yet voted on Wednesday, 10 June.