Adam Woof, Operations Manager of the Chancellors Collection at the University, has won one of this year’s Acorn Awards, which celebrate 30 of the hospitality industry’s most promising stars aged under 30 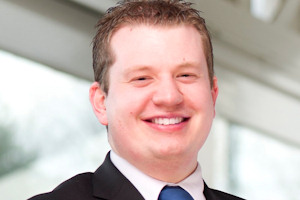 These annual awards seek to highlight and celebrate the achievements of the 30 brightest young prospects in the hospitality industry, with each winner nominated by their peers for their outstanding ability in their field.

This year’s winners come from a wide variety of sectors and departments, and include hotel and HR managers, front-of-house trainers, and head chefs from high-end restaurants, luxury hotels, and catering operations at sports stadia and events venues.

Adam joined the University in 2007 to do a Management degree in MBS and was appointed as Manager of Christie’s Bistro in May 2009 while he was completing his final year.

After graduating in July 2010, he continued to run the Bistro full-time and also studied for a Masters in Operations and Project Management at MBS from September 2010 to December 2011.

Adam took on his current role as Operations Manager in March 2013, overseeing and heading up The Chancellors Collection, which looks after the catering and event operations at Christie's Bistro and Whitworth Hall, Café Muse and catering across Manchester Museum, Café Rylands at John Rylands Library on Deansgate, and more recently the catering department within Manchester Business School.

Adam said "I felt very honoured to be nominated for an Acorn Award, but to be chosen as one of this year's 30 winners from across the hospitality industry is even more special. It still hasn't sunk in!"

For further information about the Acorn Awards, see: