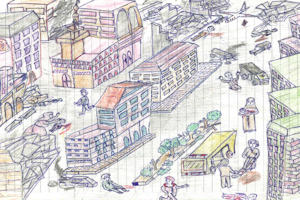 Drawings made by children displaced by the Syrian conflict showing their experiences of the war are to go on show as part of an exhibition organised by the University in partnership with non-governmental organisation Watan.

The exhibition entitled ‘Syria: Reaching Out to Children and Parents of War’ has been put together by University psychologists and Watan humanitarian workers who are working with families in Turkey and Syria and in Manchester to help them cope with their traumatic experiences.

The event, at Z-arts, Hulme, 4-6 June, will feature drawings, and activities for children and adults such as Arabic calligraphy as well as traditional music and a film made with parents who have fled Syria about their parenting journey from before the conflict, during the conflict to now in the UK.

The event is all put together with the help of Manchester’s Syrian community. Children attending the event with their families will have the chance to draw and paint pictures and write letters and send them to children displaced by the Syrian conflict.

It coincides with the UN’s International Day of Innocent Children Victims of Aggression (4 June).

Dr Kim Cartwright from the University’s School of Psychological Sciences is helping to put the event together.  She said: “The children we work with in Turkey and across the border in Syria are often deeply traumatised. Their parents and caregivers play a key role in protecting them from psychological distress, but parenting in such extraordinarily challenging circumstances is extremely difficult and stressful.

“This exhibition is about helping others to understand the ways in which children and parents are experiencing the Syrian conflict and highlighting the urgent need for interventions that support parents in looking after themselves and their children to improve their mental wellbeing and chances for a better future.”

The exhibition, which is funded by a Wellcome Trust ISSF Public Engagement Grant, is part of a wider project being carried out by the team to help build parenting strategies to enhance mental health among families affected by the war.

The event will feature the launch of a film and a crowd-funding campaign, money from which will be used to continue to reach families living through the Syrian conflict with parenting support and evaluate the benefit it provides families.

Professor Rachel Calam, who leads the Parenting and Families Research Group at the University said: "We need to work on different ways of making families aware of the best ways of helping their children through the enormous changes they experience."

Aala El-Khani, from the University who is based in the UK and working on the research project with aid workers on the ground near the Turkish-Syria border, said: “The exhibition highlights the enormous challenges faced by those caring for children in the Syrian conflict, but also ways that we can help support parents to protect themselves and their children from further psychological distress.

“One mother told us, ‘They cry at night, they scream a lot while they are sleeping. They are very angry. They have so many unanswered questions that I do not know how to answer.

“With more money and greater awareness that this event will bring, we can start to help more families with children in this terrible situation.”