Polls, politicians and pundits: the inside story of GE2015

Staff and students invited to Democracy and Elections event 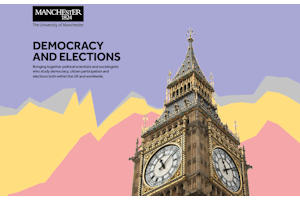 Staff and students are invited to join Democracy and Elections, the hub for electoral politics at the University, for the inside story of GE2015 as told by the experts on Monday, 1 June from noon to 2.10pm.

Manchester’s political scientists, who have been in high demand throughout the election campaign as media commentators, will join Labour’s Peter Mandelson to think about the implications of the General Election.

From the moment the exit poll was sensationally released at 10pm on election night, we quickly anticipated there would be a lot for all the parties to think about after the dust had settled.

We’ll also be discussing what it was like to be front and centre of media coverage in the run up to the election, and on the night itself.

Speaking will be Professor Jane Green, a co-Director of the British Election Study. Jane fronted up ITV’s election night coverage. She is also a leading expert on the Conservative party.

Dr Rob Ford was consultant psephologist on the BBC’s election team, is on the Polling Observatory team, and one of the nation’s leading experts on Ukip.

Dr Maria Sobolewska was a BBC Radio Five Live election night pundit and one of the foremost commentators on the ethnic minority vote.

Professor Rachel Gibson is convenor of Democracy and Elections and a leading expert on political campaigning in social media.

Professor Andrew Russell, is Manchester’s Head of Politics and a regular contributor to TV, radio and newspaper election coverage as well a top expert on the Liberal Democrats.

Professor Ed Fieldhouse is co-Director of the British Election Study and provided important insights into the behaviour of younger voters during the course of the campaign.

Professor Andy Westwood is Associate Vice-President for Public Affairs at The University of Manchester. He was a former special adviser to Labour’s John Denham in his time as Secretary of State for Universities.

Joining the academic team to discuss the election coverage and outcome will be Peter Mandelson, a former Labour MP and Cabinet Minister and one the nation’s best known politicians and party strategists.

Professor Gibson said: “The event will offer a fascinating insight into one of the most unpredictable General Elections in most of our memories and allow us to celebrate the leading role of University of Manchester colleagues in analysing the campaign and interpreting the results. We are particularly pleased that Peter Mandelson will join us and look forward to the unique insights that his long experience in British politics will bring to our discussion.

You will need your ticket and ID to enter the event.