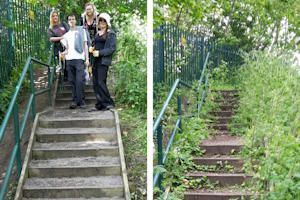 The joint Recruitment and Admissions Team for the Schools of Chemical Engineering and Analytical Science (CEAS) and Materials spent Give and Gain Day at Hough End Clough – a lovely little area on the Mauldeth Road West border of Hough End, which has been recognised by Manchester City Council as one of wildlife value to be preserved and enhanced for the enjoyment of the local community.

As the team discovered last year when they volunteered at Boggart Hole Clough in Blackley, our inner city parks are of great importance to the local community, but severely under-resourced, and they were delighted to be given the opportunity to help in some small way.

Although a small group of friends of Hough End Clough contribute to its management and upkeep, there is always so much to be done and they were glad to help out.

The day started with the clearing of some steps at one of the entrances to the Clough – the steps were overgrown with weeds, but had also become dangerous as the gradual wearing away of gravel had created significant trip hazards. The team set about clearing the weeds and scraping off the top layer of gravel and stones to make way for a new layer of gravel. New gravel was then transported in buckets from the roadside, spread evenly on the steps and tampered to construct a compact and even surface.

After a lovely picnic lunch in the sunshine, the team split into two groups –one group finished off work on the steps, the other moved further into the Clough to clear some beech trees that had self-seeded and were quickly taking over parts of the park, blocking out light and preventing growth of wild flowers. Using saws and tree loppers, the trees were removed and then dragged to a small clearing in the middle of the park where they were cut up to create a wildlife habitat. Other areas of overgrown shrubs were also pruned to ensure the pathway through the Clough was kept clear.

Sandra Kershaw, Recruitment and Admissions Manager at the Schools of CEAS and Materials, said: “Despite a few sore backs and blistered hands, we thoroughly enjoyed our day in the sunshine and it was fantastic to feel as though we had made a difference.”

To find out more, visit: