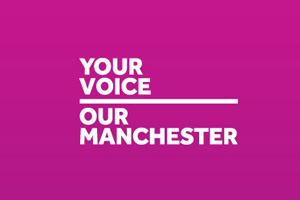 Three local charities have boosted their coffers by a total of £7,177, thanks to those of you who completed the Staff Survey 2015.

Each entry into the survey, which gave staff the chance to have their say on working at the University, saw £1 donated to one of three local charities, chosen by the colleague filling in the form.

St Ann's Hospice (Charity No. 258085) – which cares for and helps around 3,000 patients affected by cancer and non-cancer life limiting illnesses and their families and carers every year – received £2,734.

And The Christie Charity (Charity No. 49751) – which provides enhanced services over and above what the NHS funds at Manchester’s renowned cancer hospital – received £2,084.

Claire Briscoe, of St Ann’s Hospice, said: “That’s amazing, thanks so much.  How brilliant!  We really appreciate all your support. A big thank you to everyone who chose St Ann’s.”

Soraya Sheikh Rose, of Mustard Tree, said: “Wow! That's wonderful news! It's great to know that so many people chose Mustard Tree and thank you for selecting us in the first place.”

Professor Martin Humphries, Vice-President and Dean of the Faculty of Life Sciences, who leads the Staff Survey Steering Group, said: "This is a brilliant response, so thank you to everyone who took those 15 minutes to complete the survey.

"I’d particularly like to thank leaders and managers who worked really hard to encourage their staff to take part in the survey. It’s really gratifying that high response rates have been achieved across virtually the entire institution.”

Capita, which carried out the survey on the University’s behalf, will now analyse the results and put together a range of reports at a University-wide, Faculty and local organisational unit level.  This year we’ll also have additional reports showing trends between 2013 and 2015.  The results will be shared with staff early in June.

Following this, action plans will be put together as follows: