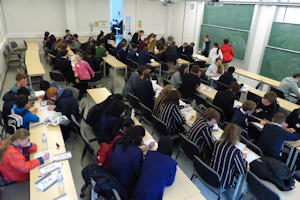 The 2015 Alan Turing Cryptography Competition was the most successful to date with more than 4,000 schoolchildren from across the UK competing in teams in an online competition featuring a series of six cryptographic puzzles.

More than one thousand teams cracked at least one of the six codes.  After a nail-biting finish, the `BWBoffins' from Bridgewater High School in Warrington won the competition, narrowly beating Belper School, Priors Field School in Godalming and Westminster Under School.

Those who took part were eligible to apply for places at the 2015 Alan Turing Cryptography Day on Wednesday, 29 April, hosted in the School of Mathematics.

More than 250 schoolchildren, together with teachers and parents, from places as far away as Glasgow and London, came to the Alan Turing Building for the prize ceremony and an afternoon of cryptographic fun, including: Maths busking, a lecture, a Q&A session on cryptography and mathematics, and a live cryptography competition in which teams of children had to crack three fiendish codes in a 90 minute period.

Teachers could compete in their own teachers’ teams to see if they could outwit their students!  The winners of this year’s live competition were Cryptex from Clitheroe Royal Grammar School, who were the first team to solve all three codes correctly.

This year’s online competition was entitled ‘The Tale of the Carbon Conundrum’ and graphene played a key role.   It was therefore fitting that graphene researcher Dr Aravind Vijayaraghavan gave a lecture to the attendees entitled “Graphene – Unexpected Science in a Pencil Line”.  He described some of the amazing properties of graphene and its potential applications for the future.

Registration for the 2016 Alan Turing Cryptography Competition will open in December.  In addition, there will be a brand new online mathematics competition next year, aimed at students in Years 12 and 13.

For more information about the competitions, visit: