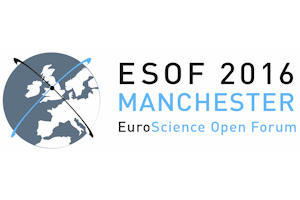 Representatives from the ESOF host city of Manchester and EuroScience – a grassroots association which acts on behalf of Europe’s scientific community – are calling for session proposals to populate the science programme at ESOF 2016, Europe’s largest general scientific conference.

ESOF 2016 (EuroScience Open Forum) takes place from 23-27 July 2016 in Manchester, the city where Marx met Engels and Rolls met Royce.  Similarly ESOF 2016 will be a meeting of minds, bringing together many of the world’s foremost scientific thinkers, innovators and scholars.

The deadline for submissions is Monday, 1 June at 10am (GMT).

Playing on Manchester’s unique history as the birthplace of the Industrial Revolution, the theme for the event has been announced as ‘science as revolution’.

Beginning in 2004 and held every two years, ESOF is a pan-European meeting dedicated to scientific research, education and innovation which aims to showcase the latest advances in science and technology, as well as promoting a dialogue on the role of science and technology in society and public policy.

This is the first time the event has been held in the UK and is made possible with the support of the Department of Business Innovation and Skills and Research Councils UK.  Further sponsorship will be announced as preparations continue through 2015.

Professor Luke Georghiou, Co-Champion of ESOF 2016 and Vice-Chancellor for Research and Innovation at the University, said: ““Manchester is a city of firsts from splitting the atom to the passenger railway line, the programmable computer and the isolation of Graphene and as such we are delighted to be the first UK city to host Europe’s foremost scientific meeting in July 2016.

“2016 is a special year for science in Manchester, as this is the year we celebrate the 250th anniversary of the birth of John Dalton – the father of atomic theory.  The EuroScience Open Forum will be the culmination of an 18 month celebration of science in our city.

“This programme is at the very heart of ESOF and I’m delighted that it is now open for submissions.  We are looking forward to receiving and reviewing ideas and proposals from science, technology, medicine, arts, humanities and social science communities across the EU and beyond.”

A core question throughout ESOF 2016 will be: how do we foster excellence in science as an agent for positive and transformative change, whilst also ensuring responsible research and innovation?

Respondents to the call for proposals are encouraged to bear this in mind when applying, as well as ensuring that their proposal sits under one of the nine headline themes: