A highly topical drama about migration and its impact, based on a book by Dr Liam Harte, Senior Lecturer in Irish and Modern Literature, is about to embark on a month-long UK and Ireland tour 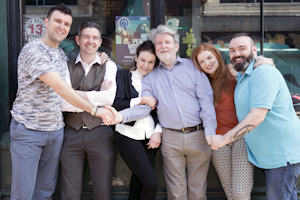 Entitled My English Tongue, My Irish Heart, the play was written and directed by Martin Lynch. It is a powerful and moving drama that tells the story of Irish emigration to England through the generations, exploring the perplexities of living with, and between, two worlds.

The tour is jointly sponsored by The University of Manchester and the Arts and Humanities Research Council.

As part of the project’s commitment to social responsibility and community outreach, a portion of the tour proceeds will be donated to two emigrant welfare charities.

The book on which play is based, The Literature of the Irish in Britain: Autobiography and Memoir, 1725-2001, was published by Palgrave in 2008. It provides the first critical survey of an unjustly neglected body of literature: the autobiographies and memoirs of writers of Irish birth or background who lived and worked in Britain between 1725 and the present day.