A big congratulations to Martyn Hussey from the School of Electrical and Electronic Engineering, who ran the 2015 ASICS Greater Manchester Marathon last weekend in an impressive 4 hrs 43 mins 24 secs 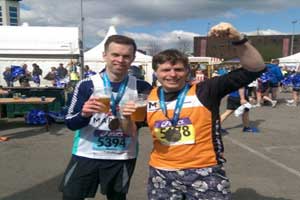 Martyn said “I’m happy with my time, given my enforced lack on training over the last 6 weeks due to illness. The first 13 miles felt good, but then my thighs really started to ache after that…..after mile 17, it was tough…very tough.”

The Post-Doctoral Research Associate, based in the e-Agri Sensors Centre in the School of Electrical and Electronic Engineering, ran the first five miles with a school friend, but they lost each other after that point.

Martyn has reached my fundraising target of £500 - which is excellent but is keen to raise more for Crohn’s and Colitis UK. Martyn himself suffers from Ulcerative Colitis and this has hampered his training schedule over the past month but Martyn still managed to achieve his target of completing the race  in just over four hours.

There’s still time to sponsor Martyn and find out more about Crohn’s and Colitis UK at:

The page will be up for a month after the completion of the race.