A multi-national team of five MSc Petroleum Geoscience Exploration students from the School of Earth, Atmospheric and Environmental Sciences have achieved an impressive 2nd place in the European final of prestigious global competition 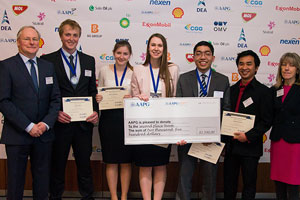 Awarded in Prague on 20th March 2015, the team competed against 20 other top European universities for the International Barrel Award which is organised annually by the American Association of Petroleum Geologists.

This achievement cements a strong track record for the MSc student cohort who took 1st place in 2013 and 2nd place in 2014.