On Thursday, 23 April 2015 you could have the chance to question some of the leading academics from the British Election Study and the University’s Politics department (one of the largest and strongest politics departments in the UK) on everything you wanted to know about the General Election 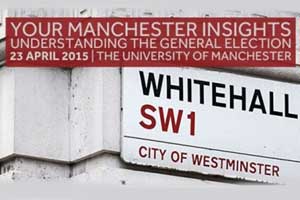 We encourage you to bring your own questions and comments, or send them to us in advance of the event, to put to our distinguished panel of speakers, which will consist of:

Professor Ed Fieldhouse, Professor of Social and Political Science and Principal-Investigator of the British Election Study

Professor Green is one of ITV’s 2015 election experts for election night on 7th May and is a regular commentator on BBC Breakfast and on other national media. Her current interests are in how the public evaluates parties and governments for competence – and the electoral consequences of this.

Professor Russell is a seasoned political pundit, making regular contributions to newspaper and television programmes. He has published widely on political parties in general, elections, campaigning and electoral engagement.

Our Chair for the evening will be alumnus and former Political Editor of BBC North West, Jim Hancock.

Professor Colette Fagan, Faculty of Humanities Deputy Dean and Associate Dean for Research will introduce and welcome the speakers and Chair.

The event will be held on Thursday, 23 April 2015 in University Place on the University campus. The evening will start at 6pm with tea and coffee and the discussions will start at 6.30pm. At the close of the discussions, we would be delighted for you to join our speakers and your fellow guests for a drinks and canapés reception. This promises to be a timely, lively and engaging event and we do hope that you will be able to join us.

Any questions, please contact alumnievents@manchester.ac.uk. You can book by clicking here https://www.eventbrite.co.uk/e/understanding-the-general-election-tickets-16631379905