The Whitworth wins North West Building of the Year

Prestigious prize for reborn gallery in the park 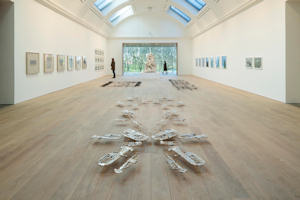 The reborn Whitworth Art Gallery has been named North West Building of the Year at a top architectural award ceremony.

The building, which has emerged from renovation double its former size and re-establishing its connection to Whitworth Park, has won a Royal Institute of British Architects North West gong.

The Whitworth’s footfall has increased five-fold since it was reopened following the £15 million transformation in February.

Highlights include the galleries, housing exhibitions by Cornelia Parker and Cai Guo-Qiang, open corridors, work spaces, the reopened Victoria Grand Hall and the ‘cafe in the trees’. The exciting space is a new glass wing overlooking Whitworth Park - which has proved to be a ‘magnet’ for visitors.

The gallery was opened with the first ever cultural use of graphene. Cornelia Parker’s ‘Breath of a Physicist’ had Nobel Laureate Sir Kostya Novoselov breathe upon a graphene sensor he made from a speck of graphite harvested from a drawing by William Blake in the Whitworth collection, triggering Parker’s ‘Blakean Abstract’, a firework display inspired by Blake.

Since then there has been a huge rise in visitor numbers – 80,000 in the first four weeks of opening, which is a five times increase on the same period in 2013.

Dr Maria Balshaw, Director of the Whitworth, said: “We are really delighted to win this award.

“The Whitworth's founding was that it be for the perpetual gratification of the people of Manchester.  The support from the local community has been overwhelming and we hope that they will continue to enjoy the Whitworth for the next 126 years."