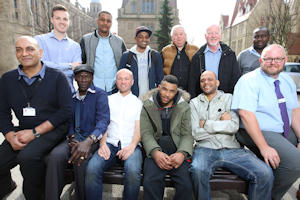 The University has launched a unique construction academy which will see unemployed people from across Greater Manchester receive training and potentially go on to full-time employment across its major capital developments.

The University of Manchester Construction Academy will support local people into the jobs that will be generated by the University’s £1 billion programme to create world-class facilities for staff, students and visitors. The Academy is the only initiative of its kind in higher education.

The initial cohort of 13 has already begun their training and the rolling programme will begin again in mid-May for a new group of learners. The waiting list to enrol is currently 150 and growing.

During the next few weeks, the learners will be studying for the Construction Skills Certification Scheme [CSCS] qualification - a requirement for employment on construction sites, Maths, English and Health and Safety. At the end of the study period the learners take an online examination.  They can also opt to receive further training such as plumbing or electrical or go straight onto an available labouring job on site.

The Academy will operate via The Works, the employment and skills centre established by the University to support local people to find jobs, develop their skills and access training courses.

Victor Esteban, who lives in Moss Side, was a Project Manager until a year ago for a construction company. When the contract ended Victor was made redundant and registered with The Works, where he received employment support.

Victor said: “When I heard that The University of Manchester was running a construction academy, I thought it was the perfect opportunity to get back into work. I am really enjoying the course, and until I started I had no idea when I was going to get back into employment. I think it’s really great that The University is doing this, and I am really looking forward to getting back out there and earning again.”

Steve Grant, Assistant Director of Human Resources at the University, said: “The academy model is unique in higher education capital programmes and fairly unusual in any sector. The Academy is about placing people into real, full-time, sustained employment and the Campus Masterplan could  generate more than 1,000 vacancies for unemployed people. We know that there are thousands of unemployed people, some of whom have a background in construction, living within the travel to work area who will benefit from engaging with the Academy.”