Spurred on by the desire to raise cash for research into finding a cure for Inflammatory Bowel Disease, Mike Addelman is running the Greater Manchester Marathon for a second time on 19 April 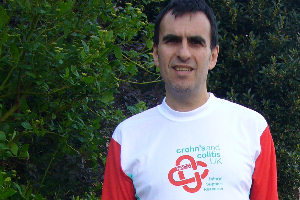 Over the last year or so, Mike, who works in the Cathie Marsh Centre for Census and Survey Research, has raised a total of £2,500 for his cause. With your help, he could increase that figure and, as the 26.2 mile marathon is the equivalent of running from Manchester to Huddersfield, he’ll need all the support he can get.

Inflammatory Bowel Disease – the collective name for Crohn’s Disease and Ulcerative Colitis – is a debilitating medical condition which affects more people than Parkinson’s, but is far less well known.

Footballer Darren Fletcher, TV presenter Carrie Grant and comedian Stewart Lee all have IBD, as does Mike's 12-year-old son, Jake, who was diagnosed at three. Jake has been in and out of hospital for most of his life, takes 10 pills every day and has to have an intravenous infusion every two months.

Even though Jake's IBD is well controlled nowadays, there are still times when his symptoms are bad and he has to endure much pain and distress. But Jake won’t be beaten by the disease and manages to live life to the full. CCUK works tirelessly to improve the lives of IBD sufferers like Jake. Scientists are making great strides in finding ways to treat IBD, but there’s such a long way to go, so CCUK’s funding of essential research is hugely important.

You can sponsor Mike to take part in the Greater Manchester Marathon and raise money for CCUK online at: