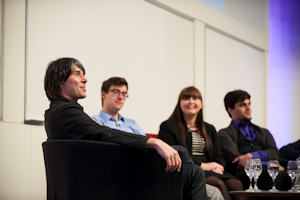 The University has celebrated the impact of charitable donations – helping us to advance our goals of world-class research, outstanding learning and student experience, and social responsibility – with a day of special events.

Notable physicist and broadcaster Professor Brian Cox was joined on stage by three scholarship students to discuss the importance of the donations at the University.

Speaking in front of an audience of nearly 600 people, the students posed a variety of questions to Professor Cox, addressing issues including the lack of funding for postgraduate students and the role higher education should play in reducing social inequality in the local community.

As a supporter of the University of Manchester’s Undergraduate Access Scholarships, Professor Cox also spoke of his passion for providing learning opportunities to talented yet disadvantaged young people through the University’s flagship social mobility programme, the Manchester Access Programme (MAP).

He said: “Through the Manchester Access Programme I’ve seen the level of support and encouragement it can give to students. A relatively small amount of money can make the difference between someone choosing to go to university or not, feeling comfortable and safe taking on the undoubted cost that they take on.

“That small difference is critical… That little push can make the difference between someone going to University or not and that makes a terrific difference to their future life, their professional life, their earning potential but also their intellectual wellbeing beyond university.”

The three students on stage with him were PhD Physics scholar Nick Dann, third year English Literature undergraduate scholar Rebecca Hardman and Oldham College sixth form student Bilal Chishti, who is participating in the MAP programme. The students’ scholarships have been provided by the generosity of donors.

Other events included behind-the-scenes tours of some of the University’s most prized assets, The Whitworth, The University of Manchester Library, Manchester Museum and the recently-opened National Graphene Institute, all of which have benefitted significantly from donor support.

A philanthropy showcase, featuring a range of donor-funded projects, gave donors, students and staff the chance to find out more about ground-breaking research being undertaken at the University.

And the day culminated with a special ceremony and dinner in which some of the University’s most significant donors were inaugurated into the President’s Circles of Philanthropy. This celebrates and honours the generosity of some of our most significant benefactors whose contributions have had a major impact on advancing the University's goals.

Since the University’s foundation in the early 19th century, donations have had a transformative effect on the thousands of staff and students who have worked and studied here.

With the help of donations, the University offers more undergraduate scholarships than any other Russell Group university, ensuring that the best and brightest students have access to a world-class education, regardless of their financial situation or social background.

What’s more, donor-supported initiatives such as the new Manchester Cancer Research Centre, the Brooks World Poverty Institute and the Manchester Business School are having a profound impact on both local and global communities.

Speaking about her experience of the University’s scholarship programme, Becky Hardman said: “I didn’t have a lot of confidence in my abilities at school. I never thought I would go to university. I’m from a working-class family and neither of my parents had been to university. It just wasn’t talked about as an opportunity. It is difficult to succinctly express my gratitude to the donors who sponsor scholarships. The scholarship that I have received has made a huge difference to my confidence and studies at the University of Manchester. Without it my options for the future would have been limited.”