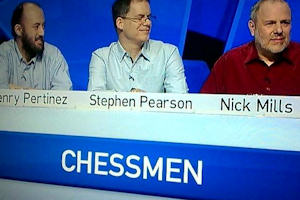 Our 'University Challenge' coach Stephen Pearson took on a new challenge – and came a respectable second with his two fellow Chessmen in the final of BBC 2’s brain-box quiz ‘Only Connect’.

Stephen, a Research Information Analyst at the University of Manchester Library, has selected and coached 11 University Challenge teams and saw us win four times in eight years – which led to him being dubbed the ‘Alex Ferguson of the quiz world' by the press.

He was team captain in the 1996/97 series and has recently appeared on screen again, this time with his team Chessmen in ‘Only Connect’.

‘Only Connect’ is a quiz show in which connections must be made between apparently unconnected things, and where patience and lateral thinking are as vital as knowledge.

The Chessmen lost 16-20 to the Orienteers in the final, and were praised by host Victoria Coren for their “mind-blowing brilliance over the series”.

To watch Stephen in action, visit: