We Get It! says the School of Nursing, Midwifery and Social Work 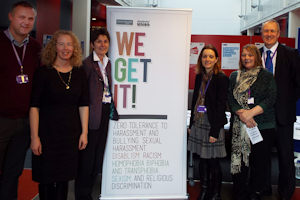 Launched in February 2014, the We Get it campaign aims to send a clear message that the University will not tolerate any form of bullying, harassment, sexual harassment or discrimination.

The zero tolerance approach is one of the actions implemented by the Behaviours group, which was formed in response to the Staff Survey 2013.

Members of the senior management team and 30 staff and students from the School attended an event to sign up to the campaign and show their support.

The School has committed to:

So far, across the University, the We Get It campaign has achieved the following progress:

Find out more and get involved

If you would like to get involved with the campaign and show your support by signing the We Get it pledge: