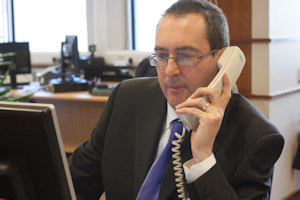 David, who works as School and Hotel Receptionist at MBS, joined the Victoria University of Manchester in 2002. Part of a team of three, he is the first point of contact for people who get in touch with MBS. In addition to dealing with a wide range of enquiries and meeting and greeting visitors, he also handles conference bookings.

He identifies MBS's new Annual PSS Conference as a good example of positive change which has resulted from the Staff Survey 2013: "It brings everyone together and gives us an opportunity to network and exchange ideas."

Capita, which is running the survey on the University’s behalf, will be choosing a winner each week the survey is live, from everyone who has completed the questionnaire. So the sooner you submit your survey, the more chances you have of winning one of the five remaining iPads.

And David isn’t the only one to benefit from the Staff Survey 2013.

After completing the survey you can choose to make a £1 donation to one of the following charities:

There’s still time to complete the Staff Survey – it’s open until Monday, 20 April.    You should have received an email from Capita on Monday, 9 March with a link to the survey – it will appear in your email inbox as:

If you can’t find it, call Capita on 0800 587 3115 and they will resend you the link.    If you don’t have email access at work, then your line manager will make sure you receive a paper copy of the survey to complete and return to Capita.