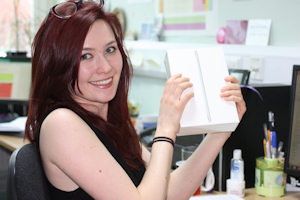 She was chosen at random from all of the people who have completed and submitted the Staff Survey 2015 since it opened on 9 March.

Capita, which is running the survey on the University’s behalf, has been choosing a winner each week the survey is live, from everyone who has completed the questionnaire.

Simone has worked as an Employability Intern in the School of Chemistry since graduating from Manchester with a degree in history last summer. She says of her internship: "It's been fantastic: I've learnt so much about how the University operates and done a lot of work with students, including helping with applications and putting on workshops. It's quite a contrast seeing the University from the viewpoint of a member of staff."

Simone was spending her final day as an intern when she found out that she had won her iPad. On Monday, 20 April, she transfers to a permanent role with the School's UG Recruitment and Admissions team, where she's looking forward to helping out at Open Days and interview days, processing applications, and supporting the outreach programme. "I'm really enjoying working at the University!" she says.

The Staff Survey 2015 closed on Monday, 20 April, however any paper questionnaires posted on Friday, and which arrive with Capita later, will be accepted.

In the next few days, the final response rate will be revealed, along with more details about sharing the results and action planning.

In the meantime, for more information about the Staff Survey 2015, visit: