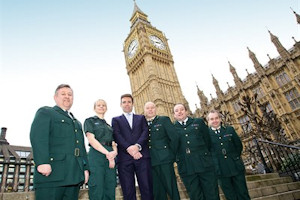 The event was organised to obtain parliamentary support for improving survival rates for out-of-hospital cardiac arrest in the UK, which are currently around 8 per cent.

Experts from NWAS told an audience of MPs that thousands of lives could be saved every year if all children were trained in basic life support, defibrillators were more readily available and screening was introduced for children at risk of heart conditions.

Guest speakers from NWAS, and those whose lives had been saved or who had successfully resuscitated a victim, spoke at the event about the importance of bystanders taking action by calling 999, starting CPR and using a defibrillator to significantly improve chances of survival.

The life-savers and survivors of cardiac arrest who talked about their experiences included a lady who successfully performed CPR on her husband while being talked through the simple steps by an NWAS call-handler and a gentleman who was resuscitated next to a lake with a public access defibrillator.

Numerous guests signed pledge boards in support of NWAS’ aims, including MPs and Lords who fully supported the need to strengthen the links of the chain of survival to improve out of hospital cardiac arrest survival rates across the UK.

The event attracted a lot of press coverage together with over 1628 mentions of the CardiacSmart hashtag in the days leading up to and following the event.

Janet said: "It was a very well organised event that put across a powerful message to everyone who attended and offered a great opportunity to network with other organisations. I was very pleased to be able to represent the University and all the work that has been done here in providing AEDs and Basic Life Support training, both within the organisation, and out in the local community."