IT Services staff boost computer performance at The Works

IT Services recently carried out valuable work at The Works, the University’s award-winning employment and skills centre which provides support to local unemployed people 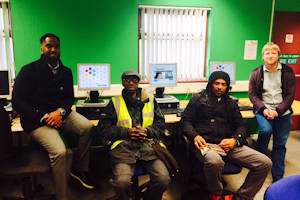 Among other things, The Works provides members of the community with IT training and access to computers, enabling them to carry out job searches, complete online applications and develop their CVs.

Colleagues from the IT Recycling, IT Leadership and IT Service Delivery teams were involved in donating computer equipment.

Stephan Small and Ian Corcoran from the IT Service Delivery team installed, configured and tested the equipment, ensuring it met licensing, operating and University standards.

Much of this work was carried out while dealing with a number of conflicting priorities, not least of which was student registration.

Previously, users of The Works had expressed frustrations that the computers were too slow and had insufficient memory. Since the installation of the new equipment, the manager of The Works has reported a vast improvement in speed and commented that the current equipment looks less like 'hand-me-downs'.

Steve Grant, Assistant Director of Human Resources, said: "The Works has over 5,500 users, many of whom do not have access to IT at home. The equipment which Stephan and Ian have installed and the work they have carried out will have a positive impact on the user experience of The Works and will do much to further communicate the University’s commitment to local communities."