UK must aspire to be best place in world to do science, says Professor Brian Cox

Science needs to have a higher cultural and political profile, if the UK is to really capitalise on its world leading position according to Professor Brian Cox OBE, the Royal Society’s newly appointed Professor for Public Engagement in Science at The University of Manchester 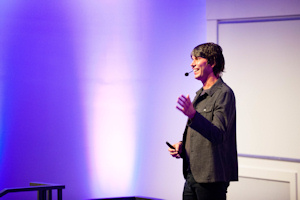 Professor Cox compares the fact that all our political parties agree that science will be a key driver of economic growth in the coming decades to the fact that we invest a smaller percentage of our GDP in research than many of our competitor economies.  He believes that one factor behind this is that science is not held in the same high regard culturally as it is in many countries, particularly in developing economies such as India and China

Professor Cox said: “We are fortunate to have in place all the components to make Britain the best place in the world to do science; world-leading research and teaching universities, national laboratories and facilities and powerful and prestigious institutions like the Royal Society. It is strange, therefore, that we invest significantly less in scientific research than our major competitors; the UK invests 1.8% of GDP; USA 2.7%; Germany 2.8%; South Korea 4%. Part of the reason is that science is not held in the same high regard culturally as it is internationally, and particularly in developing economies such as India and China. China doubled its investment in science between 2000 and 2012 while the UK reduced the proportion of its GDP spent over that time.

"In my new position at the Royal Society, I want to help change the perception of science. I want to see our great cultural and scientific institutions – the universities, the learned societies, museums, schools, the BBC – work together to raise the cultural and political profile of science, research and education. I want to see our investment in science, and particularly in young scientists, rise to levels at or beyond our competitors. I passionately believe that science can be a vehicle for the redistribution of opportunity in our society as well as a driver for economic growth.

The UK currently has 1% of the world’s population, 3% of the investment in science and produces 14% of the highest impact research papers.

One aspect Professor Cox’s new post as a Royal Society Professor, will be looking at how the Royal Society can help to provide inspiration for teachers and students and to give them a flavour of the fun that can be had bringing science to life.  As part of the programme he will be looking to work with partners from across science and with organisations such as the BBC.

Paul Nurse, President of the Royal Society said: “The UK is very good at science but it is seen as something difficult and perhaps removed from ordinary people.  We have high levels of trust and surveys show that scientists as seen as creative, interesting and open-minded people but how many of us encourage our children to be a scientist?

“We are seeing signs of a recovery with the numbers of young people studying science creeping up but we really need to see a bigger change and that requires more radical action.  The Royal Academy of Engineering estimate that by 2020 we will need over a million new science, engineering and technology professionals. Britain was built by science and engineering during the industrial revolution and we need to rediscover that passion for innovation in all parts of society.”

The Royal Society’s appointment of its first Professor for Public Engagement in Science is part of a wider grass roots programme to involve the UK’s best scientists in getting the public excited about science.

Professor Cox continued: “We are a global scientific powerhouse; more efficient than any of our international competitors, and this gives us a unique opportunity. With renewed political focus enabled through public support, we can aspire to see a step change in science in the UK, using our world-leading infrastructure to allow a new generation of scientists from all social and economic backgrounds to generate new knowledge and wealth for our country. It is the job of the Royal Society Professor for Public Engagement in Science to make this case.“