Exhibition honours man who brought literature to the masses 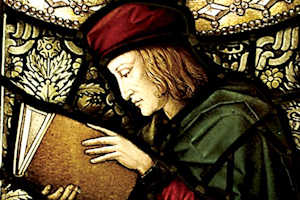 To coincide with the 500th anniversary of the death of the world’s most famous commercial printer, the exhibition will celebrate the legacy of the Italian Aldus Manutius (1449-1515) who brought the Greek and Roman classics to the public through the new technology of printing and pioneered the pocket sized book we now take for granted.

The exhibition celebrates the legacy of Aldus, who also introduced the world to italic type, as an innovative scholar-businessman who founded the Aldine Press in Venice at the end of the fifteenth century and sought to produce critical editions of the classical authors.

Called ‘Merchants of Print: from Venice to Manchester’, the exhibition will examine how such a rich collection was amassed in Manchester which is a city more famous for its textiles than its texts and more associated with mills than libraries.

The John Rylands Library became home to the world-leading collection of Aldines which were drawn together by the merchant collectors and citizen scholars of the industrial North of England during the nineteenth century.

Stephen J. Milner, Serena Professor of Italian, at The University of Manchester said: “A story of cultural translation emerges in which the parallels between mercantile Renaissance Venice and mercantile industrial Manchester were not only registered in the neo-Gothic architecture of Manchester’s palaces, but also in the literary and educational cultures of both cities.

“In the nineteenth century, Manchester imagined itself in the image and likeness of the great merchant cities of Renaissance Italy: Venice and Florence. This exhibition showcases part of the outstanding Italian cultural patrimony left to the city’s libraries and museums by the merchant collectors, theologians and educators of the day.”

Rare Books and Maps Manager Julianne Simpson said: “The Aldine collection at The John Rylands Library is truly remarkable for its size and depth, containing editions of the finest quality printing the Renaissance had to offer. Rarely has such an exquisite display of books from the foremost centre of early printing been on public display.”

The spotlight will be turned on local collectors, from Bishops to mill-owners and gynaecologists, and explores how they looked to the texts of Renaissance Venice for education and instruction. It will be accompanied by a full programme of public events – including:

The exhibition runs until Sunday, 21 June.