The work of a team from SEAES has been recognised, after they won an impact award for developing new instruments for monitoring drinking water and emissions of gas from the ground. 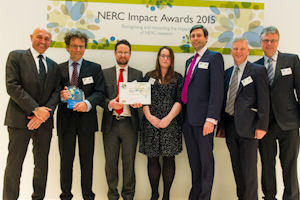 Dr Steve Boult and colleagues were awarded the economic impact prize at the NERC awards for achieving exceptional economic benefit. The £10k prize money will be used to fund a water quality demonstration project in a developing country.

Spin-out company Salamander licensed the products to Siemens and Ion Science, who between them have generated royalties equivalent to £7m in sales over the past five years.

Their water products, are used by all major UK water service providers, and their gas product is stimulating growth in the market for monitoring greenhouse gases from fossil fuel extraction, such as shale gas and coal-bed methane.

Since its launch, Salamander has employed 14 University of Manchester graduates, as well as generating further jobs and investment elsewhere both in the UK and internationally.

Dr Boult said: “This is an exciting time for the whole team. The Impact Award money will be used to run a water quality management demonstration project with Save The Children deploying Chloroclam to monitor the effectiveness of drinking water disinfection in developing countries with less, and occasionally, during crises, no infrastructure.”