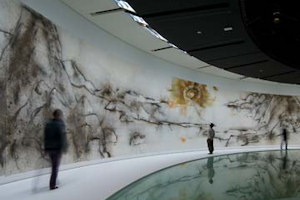 Cai is best known for his remarkable projects using gunpowder, including the firework displays for the opening and closing ceremonies of the 2008 Beijing Olympics. His installation, Unmanned Nature, includes a 45 metre-long, four metre-high gunpowder drawing – an unmissable highlight of the Whitworth’s upcoming season. It is the first time that the installation – first commissioned by the Hiroshima City Museum of Contemporary Art – has been shown outside Japan.

Cai Guo-Qiang is also one of the artists involved in Manchester’s Chinese New Year celebrations. As the city welcomes in the Year of the Ram next month (with lanterns, fireworks, the Dragon Parade and events at Manchester Art Gallery), Cai’s work will be projected onto St. Ann’s Square as part of a bigger light and music show.

The Whitworth opens to the public on Saturday, 14 February with a weekend’s worth of art, music, talks, walks, performance, literature, family fun and a fire and light show.