Nominations now open for our Volunteer of the Year awards 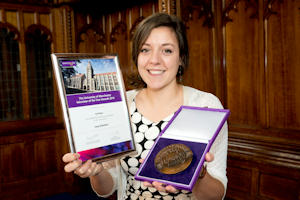 Every year the University celebrates through the Volunteer of the Year Awards the actions of staff, students and alumni who give their time and commitment to communities locally, national and internationally.

Previous nominees have taken on a wide range of role to support vulnerable members of the community both in the UK and overseas, including support to the homeless, the elderly, those in crisis and those living in poverty.  They have done this through mobilising local communities, raising vital funds and providing one to one support.

Nominations are now open for the 2015 awards with three categories:

Do you do something to support others or know a member of the University that does.  If so why not nominate them?  The process is easy!

Last year’s staff winner was Lucy Swinton from the School of Nursing, Midwifery and Social Work.

Lucy is a Director and the Oltenia Project Coordinator for The Life Foundation. Lucy joined the organisation as a volunteer on projects in Romania and India, and later took on the role of Project Coordinator supporting the recruitment and support of volunteers travelling out to Romania.

Most recently she has become a Director for the organisation, which includes support in the development of the organisation and its various projects, and managing the Recruitment and Fundraising sub-committee. She also fundraises for The Life Foundation through cakes sales, sponsored runs, street collections and live music events.

Each winner receives a cheque, made out to the organisation that they support: £300 for the overall winner, and £200 and £100 for the 2nd and 3rd place runners up. In addition the overall winner in each category is put forward for the University Social Responsibility Award, one of the President’s Distinguished Achievement Awards.

For more information or to make a nomination, visit:

To inspire you, information on the 2014 winners, and winners from previous years, can also be found on these pages. The Awards are organised by the Student Development and Community Engagement Division, which is part of the Directorate for the Student Experience.

More information on the University’s other Social Responsibility Awards can be found at:

The deadline for Volunteer of the Year nominations is Friday, 13 March 2015.