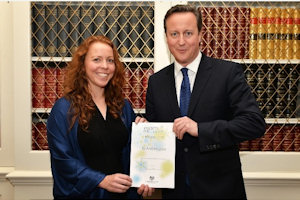 Dr Amy Hughes, a clinical lecturer in emergency response at the University's Humanitarian and Conflict Response Institute, also works with UK-Med, a national organisation based at the University which is coordinating NHS volunteers deploying to Sierra Leone as part of the UK’s response to treat those with the virus.

Dr Hughes led the first wave of NHS volunteers to the West African country in November last year, ensuring that everyone was trained to provide the best possible care to those suffering with the disease while staying as safe as possible.

She was presented with her award by the Prime Minister at a special reception in Downing Street on Monday before flying out to re-join volunteers in Sierra Leone on Wednesday.

She is the 200th winner of the award, which recognises outstanding individual volunteers, people who are making a change in their community and inspiring others.

In 2011 she dedicated seven months to running a hospital in northern Sri Lanka with Médecins Sans Frontières in the aftermath of the civil war.

After a brief return to the UK to work with London’s Air Ambulance and realising she had an immense passion for humanitarian medical work, she began a PhD in medical care in humanitarian emergencies with UK-Med and the Humanitarian and Conflict Response Institute at Manchester, where she is also a lecturer. Her academic post at HCRI has been generously funded by the Tuixen Foundation.

In 2013 when Typhoon Haiyan hit the Philippines, she deployed as part of the UK medical team to support the relief efforts. Clinically she works part time as an Emergency Medicine specialist at Derriford Hospital in Plymouth.

Prime Minister David Cameron said: “It is hard to put into words just how inspirational remarkable volunteers like Amy are. In the face of considerable personal risk, they see only the dreadful human suffering of Ebola and are driven to do everything they can to alleviate it.

“Amy’s selfless commitment to ensuring medics in Sierra Leone are trained to provide the best possible care, while keeping themselves as safe as possible, is a credit to the NHS and Britain as a whole. I am proud to name her the UK’s 200th Point of Light.”

Dr Hughes said: “I feel immensely honoured to receive the Pride of Light award and accept it, recognising all my local and international colleagues who have inspired me, and others, through their ongoing passion and dedication to the Ebola response and many other humanitarian emergencies.”

International Development Secretary Justine Greening said: “Dr Amy Hughes is a brave and dedicated humanitarian who has put her life on the line to help people in desperate need around the world.

“From providing medical care in the aftermath of Sri Lanka’s civil war to treating victims of the Philippines’ typhoon and now fighting Ebola on the front line in Sierra Leone, Amy is a shining example of the selfless spirit of Britain’s NHS workers.

“Her passion for this lifesaving work has inspired other British doctors and nurses to join the UK’s fight against Ebola. With their help we can defeat this terrible disease.”