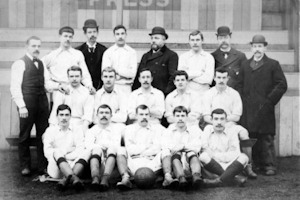 He recalls: “In 1979 when I arrived in Manchester as a lecturer in medieval history, I realized that I would have to choose which of the city’s two football teams to support. Since the floodlights of City’s old Maine Road ground in Moss Side were then clearly visible from the Main Library, I decided to opt for the ‘local’ team.

“However, this new book suggests another reason why I was right to become a Blue: it was actually a student from the University who provided the inspiration for the team which was eventually to evolve into Manchester City Football Club.”

He adds: “That City’s origins can be traced back to a team created in 1880 at the Anglican church of St Mark’s in West Gorton is well-known. What Toovey shows is that the decision to create a football team was probably due to the influence of William Sumner, an Owens College (as it then was) engineering student.”

Sumner began his studies in 1879 and moved into lodgings in West Gorton where he joined the St Mark’s cricket club. In November 1880, when the church’s football team played its first ever game, against Macclesfield Baptists, it was Sumner who was the captain.

Sumner was a prize-winning student who graduated at the first ever degree day of the new ‘Victoria University’ in 1882 and who was later awarded a Masters’ degree in Engineering. He moved to London but maintained his links with the University, donating £25 to the 1901 Jubilee Fund to mark the fiftieth anniversary of the foundation of Owens College.

Stephen concludes: “Sumner had left the West Gorton football team in December 1882 but by then had planted the seed which was eventually, in 1894, after successive incarnations as Gorton AFC and Ardwick FC, to grow into Manchester City Football Club.”