Do you know anyone who is in Year 11* or below, interested in secret codes and would like to win some great prizes? Then why not encourage them to take part in the Alan Turing Cryptography Competition? 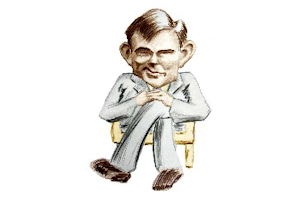 Follow the story of Mike and Ellie, two code-breaking kids, who get caught up in another cryptographic adventure! Can you solve all six of the devious codes as Mike and Ellie try to solve the mystery of the Carbon Conundrum?

You don't need to be an expert mathematician or a computing whizz to take part: you just need to be good at problem-solving and thinking logically!

Now in its fourth year, the School of Mathematics will be running the Alan Turing Cryptography Competition. This web-based competition runs from January to April 2015, and, for those who can make it, will conclude with a special cryptography event and prize ceremony at the University.

To take part, groups of friends should form teams of up to four people and register on the competition website.

Registration is now open at:

If you have any questions about the competition, please email:

The competition is sponsored by Skyscanner: www.skyscanner.net

(The caricature of Alan Turing is copyright 2011 of Charles F Cooper and is used with permission: www.coopertoons.com.)