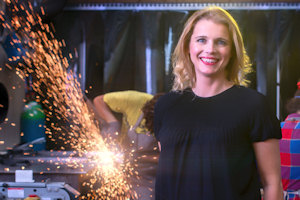 Danielle presented a demonstration packed, three-part series called 'Sparks will fly: How to hack your home' on BBC FOUR this Christmas on the evenings of 29-31 December.

The Professor of Radio Frequency Engineering, who specialises in radio frequency and microwave communications, revealed how viewers can change the world from their very own home by taking control of the devices we use every day. She took three great British inventions - a light bulb, a telephone and a motor - and demonstrated how viewers can adapt, transform and 'hack' them to do extraordinary things.

Danielle said: "I want young people to realise that they have the power to change the world right from their bedroom, kitchen table or garden shed."

Filmed in front of a live audience in the iconic theatre at the Royal Institution of Great Britain, the original science events for children were started by Michael Faraday in 1825 and have long been seen as a favourite British Christmas tradition.

If you missed the original broadcasts, you can still watch them on BBC iPlayer at: