In 2014, the University not only entered the Stonewall Top 100 Employers, but went straight to 43rd place (out of 397 organisations) 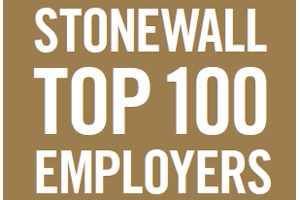 Stonewall is Britain's leading tool for employers to measure their efforts to tackle discrimination and create inclusive workplaces for lesbian, gay and bisexual employees.

The 2014 Index places Manchester as the third highest university in the country (the University of the West of England is 11th and Cardiff are 24th) and we are also amongst the highest placed organisations in the North West.

Given that the number of organisations entering for the Index increases year on year, the University's position is a great achievement. Additionally, many of the Top 50 companies are major blue chips with unlimited budgets for their activities, so creativeness, support and enthusiasm from all areas of the University population make this progress all the more significant.

This is the fourth year running that the University has seen improvement, rising from 235 in 2011, to 161 in 2012, to 158 in 2013 (Stonewall: Index Results). This remarkable improvement of 115 places reflects the hard work of ALLOUT (the LGBT Staff Network Group) but would not have been achievable without the support of the senior management team, business areas and staff and students.

The high placing also sends a positive message of inclusion, not only to existing staff and students, but also to potential employees, future students and the general public. Furthermore, it directly aligns with the University’s 2020 agenda and HR’s people strategy.

We hope that this will continue to help the University achieve an even higher placing in 2016.

where the full countdown and positions of other companies is listed.