A team who helped developed one of the world’s most powerful radio telescopes has been recognised by the Royal Astronomical Society (RAS). 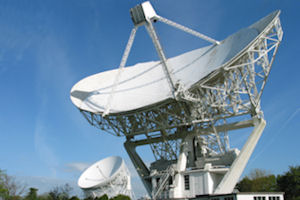 After spending the last ten years designing, building and operating the new e-MERLIN telescope network the team behind it, based at the University of Manchester’s School of Physics & Astronomy and its Jodrell Bank Observatory, have won the 2015 RAS team award.

The small team involved in the design and construction of e-MERLIN have delivered what is now one of the world's most powerful radio telescopes, created by linking seven individual large dishes across the UK (including the iconic Lovell Telescope) via a dedicated optical fibre network to a powerful correlator at Jodrell Bank.

e-MERLIN is now being used by hundreds of astronomers in the UK and around the world to carry out radio imaging, spectroscopy and polarimetry at high angular resolution with unprecedented sensitivity. Current projects range from studying the formation of stars and planets to the evolution of galaxies and probes of dark matter and dark energy.

Professor Simon Garrington, who leads the team, said: “We are all delighted to have won this award. The team has been incredibly dedicated and used their skills to overcome many challenges to get this technically demanding project up and running. They thoroughly deserve to be recognised in this way.”

The e-MERLIN project has been funded by The University of Manchester, the Science and Technology Facilities Council, the Northwest Development Agency, The University of Cambridge, Liverpool John Moores University and has been developed in collaboration with the US National Radio Astronomy Observatory and the National Research Council in Canada.

Professor Martin Barstow, President of the Royal Astronomical Society, offered his congratulations: “There are many exceptionally talented women and men working in astronomy and geophysics, here in the UK and across the world. Our medals and awards honour those who have made an outstanding contribution to these sciences. As President of the RAS, it gives me enormous pleasure to congratulate this year’s winners and to wish them continued success in all that they do.”