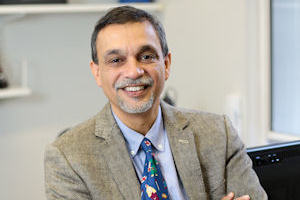 He was awarded the prestigious fellowship, the highest level of achievement given by the HEA, for his leadership and significant contribution to his field.

Principal Fellowships are given to those nominees with established academic careers who have held substantial strategic responsibilities in Higher Education. They are part of the Higher Education Academy’s professional recognition programme which aims to support individuals in their career progression.

He has published significant research relating to public health and primary care including work on prevention of cot deaths, epidemiology of solvent abuse, preventing paediatric admissions, evaluation of telemedicine and on patient safety.

Alongside his roles as clinician, teacher and researcher, Aneez held the position of the University’s Associate Vice President for Social Responsibility and Equality and Diversity from 2006 until September 2014. It was during this tenure that he carried out much of the work for which he was recognised with the Fellowship.

He is internationally recognised for his research on discrimination in the medical profession which has led to significant changes in recruitment, selection and monitoring of the medical profession as well as the opportunity to spend a year as a Visiting Professor at Harvard Medical School following a Harkness Fellowship award.

He completed his training first as a general practitioner in 1987 and then as a public health physician in 1992, obtaining his PhD from the University of London in 1996.

He is currently the non-executive Chairman of the Robert Darbishire Practice, an inner city practice in Manchester where he carries out his clinical work.

Throughout his career, Aneez has sat on several national working parties looking at the issue of racism in the medical profession, patient safety in primary care and on assessment of doctors.

He was involved in the Shipman Inquiry between 2001 and 2004 as the only medical advisor to the inquiry’s chair, Dame Janet Smith. He was then co-chair of the BMA Equal Opportunities Committee between 2004 and 2007. An active trade unionist he was President of the Medical Practitioners Union (a trade union of doctors working in the NHS) between 1997 and 2003.

On being made an HEA Principle Fellow, Aneez commented: “This was a great honour for me personally but ultimately it is a recognition of the hugely important work that we have done in Manchester on areas such as equality and diversity, fair admissions and around postgraduate education.”