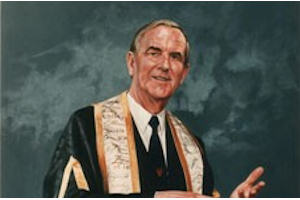 An expert on cloud physics and former Director of the UK Meteorological Office, his work includes the Mason Equation, giving the growth or evaporation of small water droplets. In the 1960s, he helped to modernise the World Meteorological Organization.

Born 18 August 1923, he graduated in physics in 1948 and was appointed as a lecturer in meteorology at Imperial College London.

He initiated experimental and theoretical research on fundamental processes involved in the formation of clouds, rain, snow, hail and the electrification of thunderstorms. Having established a world-leading group and written the first monograph on ‘The Physics of Clouds’, he was appointed the world’s first professor of cloud physics in 1961, elected a Fellow of the Royal Society and received the Charles Chree Medal of the Institute of Physics in 1965.

He concentrated, however, on modernising and equipping the Meteorological Office to become a leading world centre for global weather and climate prediction and research using the most advanced mathematical models and the most powerful computers.

In 1965 he replaced traditional empirical forecast by objective numerical techniques, at first restricted to Western Europe and the North Atlantic, but gradually extended to cover the whole globe by 1983. For this he was appointed Companion of the Bath in 1973 and knighted in 1979. He received the Glazebrook Medal of the Institute of Physics (1972), The Symons Gold Medal of the Royal Meteorological Society (1975) and the Royal Medal of the Royal Society in 1990.

Following his retirement from the Meteorological Office, Sir John served UMIST as Chancellor from 1986-96 and received honorary doctorates from 12 universities.