As part of the 2013 Staff Survey campaign, the University gave £1 for each response to charities chosen by our staff, which resulted in a donation of £4,700 to support cancer research 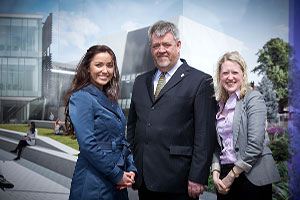 In May 2013, representatives of cancer charities The Christie and Cancer Research UK came to campus to collect cheques for £2,037 and £2,666 respectively from Registrar, Secretary and Chief Operating Officer Will Spinks:

Both charities decided to put your generous donation towards the More Tomorrows campaign which is raising funds to build the new Manchester Cancer Research Centre (MCRC) at The Christie site. The building is now entering the final stages of completion and it is hoped that scientists and researchers will be able to move in in Spring 2015.

At the MCRC, world-class research into cancer biology, drug discovery and clinical trials will come together on one site. A unique collaboration between Cancer Research UK, the University and The Christie means that doctors and scientists work side by side to take new discoveries from the lab bench to the patient’s bedside as quickly as possible. It’s this unique set-up that makes Manchester so special, providing the most effective environment to develop new, ground-breaking treatments.

Cancer rates in the North West are the worst of any region in England: Manchester has 446 new annual cases per 100,000 of population, which is 18% higher than the English national average. With five families in the North West affected by cancer every single day, the need for more research into this devastating disease has never been greater.

In the new centre, five state-of-the-art laboratories will house 150 additional scientists studying the basic biology of cancer, the essential first step along the personalised medicine pipeline.

Each laboratory will house up to 30 multi-disciplinary scientists - biologists, chemists, clinical researchers, statisticians - working collaboratively on a critical area of research that will accelerate the pace of discovery across the following key research priorities:

Cancer Research UK wants to accelerate progress and see three-quarters of people beat cancer in the next 20 years. The MCRC will be pivotal in achieving this ambition, not just for cancer patients in the north-west, but globally.

Your support will help them to beat cancer sooner through the More Tomorrows campaign.