WaterAid: How our gift was used

As part of the 2013 Staff Survey campaign, the University gave £1 for each response to three charities chosen by our staff, including a donation of £1,673 to WaterAid 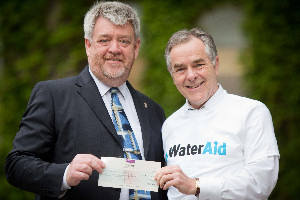 In July 2013, WaterAid's representative, Dave Boughen, came to campus to collect the cheque:

We knew that our donation would allow WaterAid to continue providing some of the poorest communities in the world with clean water and a safe place to go to the toilet, but we were curious to know exactly how our money had been used and asked WaterAid for more information.

In response, WaterAid told us that they don’t link donations to specified items, such as a wells or pumps, because this requires higher administration costs.

Instead, the charity prefers to direct donations to their work in general: a resource of unallocated money allows them to respond quickly to changing situations, as well as giving them the security to plan future projects.

To fund a whole project requires a donation of £50,000 or more, while donations of £3,000 and more can be directed to work conducted by one of WaterAid’s country programmes.

Nevertheless, smaller sums can play a vital part in transforming people’s lives and these are examples of how our donation might have been used:

So you can be sure that, by responding to the 2013 Staff Survey, you not only took action to improve your working life, but also helped to change the lives of people in some of the worlds most marginalised communities.