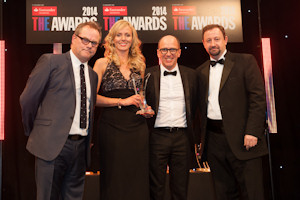 The Times Higher Education Awards ceremony, which was held last night (27 November), is open to every UK university. The community award was made for the second year in a row to the University’s School Governor Initiative, run in conjunction with the charity SGOSS – Governors for Schools.

This scheme, which is part of the University’s overall aim of making a positive difference to communities, encourages staff and alumni to bring their skills in areas such as finance, law and human resources to the role of school governors.

In many areas schools have great difficulty in recruiting governors with these skills, so the University takes an active role in encouraging people to come forward. In 2012/13 – the period covered by the award – this was a total of 241 people, 116 of whom were staff.

Commenting on the award, Sir Deian Hopkin, president of the National Library of Wales and one of the judges said: “Since 2012-13, the university has helped to fill one in five school governor vacancies in the North West and has doubled the number of its staff involved.

“By including alumni, Manchester now ranks highest of all UK employers involved in Governors for Schools scheme, with governors volunteering almost 3,000 days and impacting on 85,000 learners.

“This intervention has had a measurable effect on local school performance and reinforced the university’s strategic ambition to make a positive contribution to its community.”

Now in their tenth year, the Times Higher Education Awards celebrate the outstanding achievements of institutions, teams and individuals in the UK higher education sector.

The Minister for Universities, Science and Cities, Greg Clark, joined academics and professional and support staff from all over the country at the event, hosted by comedian Jack Dee at the Grosvenor House Hotel, London.

Stephanie Lee, Head of Widening Participation and Outreach at Manchester, said: "The University is the first higher education institution to take such a coordinated approach to school governance.

“The response from staff and alumni has been hugely impressive and last year we topped SGOSS’s volunteer recruitment table, placing us above many multi-national companies. We are now supporting other universities who are developing similar programmes, thereby extending the reach and impact of the initiative even further.”