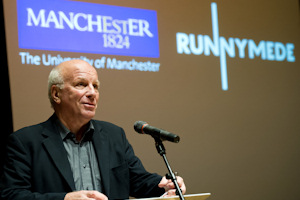 Speaking at last night’s lecture entitled 'Tackling Discrimination: football, media and the pursuit of equality', Dyke said it was important for organisations to prove they have a diverse workforce.

The FA chairman talked about his experience of “changing the racial mix of the staff” while working as the Director General of the BBC by setting “a set of ethnic minority targets for staff and management”. Dyke is well known for having labelled the corporation as “hideously white”.

He said: “What was remarkable was just how quickly we were able to change things when senior and middle management discovered they would be held accountable if we didn’t change and that it would impact the size of their bonuses.”

Dyke also spoke about his role as the chairman of the British Film Institute and how he told all production companies who want funding to “prove you have a diverse workforce or you won’t get it."

When talking about the issue of discrimination in football, Dyke said: "The FA inclusion advisory board is looking at it and it might be a good way forward. But the last thing we want is for it to end up as tokenism.”

He indicated there would be some form of the Rooney Rule introduced in English football as a way to increase the number of black and ethnic minority managers and coaches in the sport.

The Rooney Rule is an American idea devised in 2003 which requires NFL teams to interview minority candidates for head coaching positions. Leading experts from the Football League are calling for the introduction of the rule here as a way to tackle low levels of black and ethnic minority managers in the Football League.

To date, only three of the 92 league clubs in England have black managers, while the numbers are just as low amongst top-level coaches.

But Dyke repeatedly reminded the audience that the FA cannot force clubs to adopt rules or appoint candidates, although he hopes to influence a plan for change that is about action rather than just words.

Also speaking at the lecture were: Rimla Akhtar, Chair of the Muslim Women’s Sports Foundation and television journalists Gillian Joseph and Bridgid Nzekwu.

The lecture was part of the Jim Rose memorial lecture series hosted by the University’s School of Social Sciences and the leading independent race equality think tank the Runnymede Trust.

Jim Rose co-founded the Runnymede Trust in 1968 and became known for his unwavering and unbroken contribution and devotion to racial justice and civil rights. Following his death in 1999, the Trust established the lectures in his name to mark his enduring legacy and continue the struggle for racial justice.